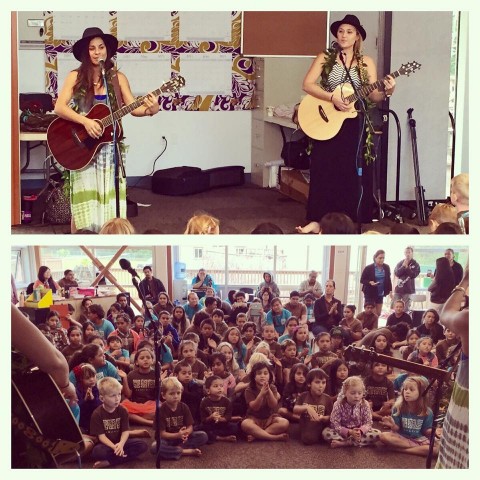 Anuhea & Kimie spent a very full two days doing school wide assemblies and small group workshops at each of the 4 Hawaiian culture-based charter schools on Kaua’i. Their journey began at Kawaikini Public Charter School, where Mana Mele‬ students greeted them with oli and lei. At the schoolwide (K-12) assembly, they shared songs and stories, answered questions, and invited the Mana Mele students onstage to sing along to Kimie’s “Make me Say”.

Then, middle and high school students were able to participate in small group workshops with both artists where they sang and wrote songs, including an original composition with Kimie about their school. Our favorite line: Kawaikini – Li’ili’i mākou akā Ikaika nō! (Kawaikini – we are small, but we are strong).  See video clip below to hear it from the ‘opio!

Anuhea & Kimie then spent the afternoon at Kanuikapono in Anahola, the lead school on Kaua’i for piloting Mana Mele curriculum toward a diploma-granting Music & Multimedia Academy. They each began their visit teaching a small group of students one of their songs. These students were then called up to perform the song with their mentor during the schoolwide assembly. Here Senior Tiffany sings Kimie’s “New Day” for her classmates.

Their second day began with the ‘opio and community of Kula Aupuni Niihau A Kahelelani Aloha (KANAKA) Public Charter School in Kekaha. After the schoolwide K-12 assembly, during small group workshops Kimie helped students find and learn harmonies to a song composed by KANAKA student Kapua Kanahele. Anuhea taught students ‘ukulele chords and her ‘Simple Love Song’, as seen in this clip below. 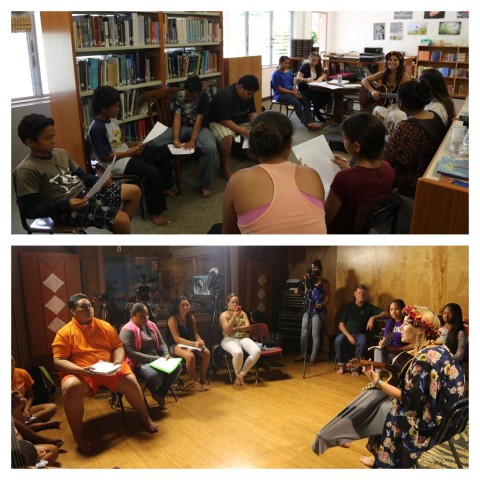 Mana Mele’s Kaua’i island tour with Kimie and Anuhea wrapped up with a visit to Ke Kula Ni`ihau O Kekaha on the island’s west side. It was a one-of-a-kind experience for both the haumana and our guest mentors to work and learn from each other. In this image, Kimie works with middle school students teaching harmonies to “Rooted” as Anuhea talks with high school students on Lyric Composition and Motivation. The high school students in Anuheaʻs workshop composed an amazing song titled, “Donʻt Drift Away”. Hereʻs a sneak peak:

Big mahalo to Anuhea and Kimie for accompanying Mana Mele to the beautiful island of Kaua’i and sharing your time and talent with our charter school youth! A huge mahalo as well to each of the Kauaʻi charter schools for hosting our mentors and Mana Maoli staff.

For more info about these awesome, innovative, culture, community and environment-based schools, here are links to the schoolsʻ websites: